I got up this morning and fed my hungry little monsters and then got dressed with Wyatt and headed out to pick up groceries and some things for the party next saturday. I actually think I got almost everything I need! Of course there are a few things left to get but I really got a lot done and got some game stuff set up for the kiddos and wrapped a few of the prizes. I'm glad I'm able to get a few things done at at time so that I won't be stressing so much this Friday & Saturday trying to get everything done in time! Then, after yummy grilled 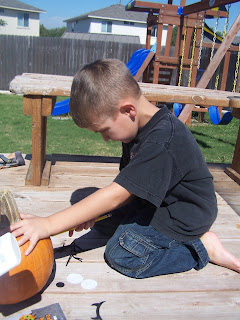 cheese sandwiches and fresh smoothies for lunch, the boys and I grabbed their pumpkins and the pumpkin art kit we got from our been boo-ed treat bag and headed out to the deck to decorate their pumpkins. I knew it would be hard for the little ones so I got Logan set up first and told him how to put together his pumpkin spider. He took the longest to get it done but he did an awesome job! He's turned into such a big boy it's crazy! CJ was into the pumpkin art at first and got most of his stuff on his pumpkin but then he decided he was upset because he wanted the spider (even though Logan 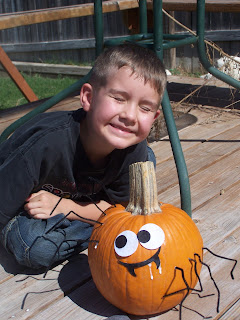 picked it and was 1/2 way done and CJ picked out the pirate!) so I ended up fixing it when hed decided he didn't want to do anymore. For the most part I think I got the parts he did back where he had put them so it's still his lol. And there were more parts that he didn't put on so I left them off... it's still a cute little pirate! Then CJ decided he wanted to play with the camera and his toys. Actually, him playing with the camera worked out well because he took some pictures (pretty good ones at that) of me helping Wyatt to glue on his pumpkin art pieces. Wyatt's pumpkin was pretty much all done by me but he tried to help a little. It was hard because he's young and the pieces that needed to be glued were really small so he couldn't even really hold them. I still think he had fun trying to help out and he adores being outside so he had a blast running around in the yard. He's just such a cutie pa-tootie pie! 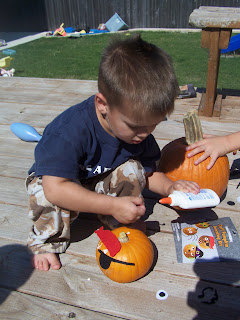 Then it was time for naps (and Mommy caught a quick nap too while Logan watched some TV with Daddy). Mommy got a break from dinner (Daddy cooked today!) so I spent some time getting things together for the party and cleaning up. After dinner, which all the boys finished all off, they got to each an ice cream sandwich. Even though they didn't make a huge mess they still all went to take a bath and they had a blast splashing around in the water together. After they got jammies on and got ready for bed Logan and I went into his room and cleaned up in there (they have a floor you can see again!!! lol) and then it was time for stories and bed time.﻿