This Saturday we are having Logan's 7th Birthday party and he picked space/rockets for his theme this year. So I already have a set to make a rocket cupcake-cake and I bought rocket cookie cutter to make rocket sandwiches :) I have to find a rocket pinata though... I found a party hat that I may add some wings too and call it gravy. Last night and this morning I started getting the "Pin the Flame on the Rocket" (pin the tail on the donkey) game made. 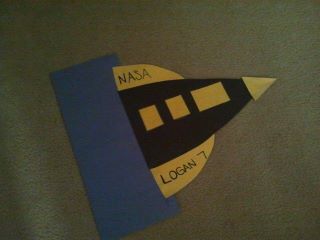 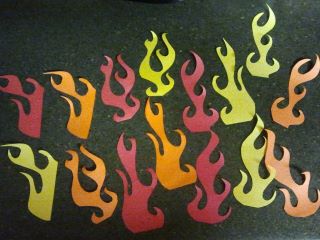 I am excited that he is finally at an age where we can really play games! We also have a toy bean bag Rocket from the show Little Einsteins that we are going to use for "Hot Rocket" (hot potato) and then since I don't think I have enough chairs we're going to play "Musical Pillows" (musical chairs). I'm stressing out but I think things are coming along nicely and I'm super excited to have his first birthday party having invited his class (although only 2 people have rsvped). Then it's on to stressing about Jameson's 1st birthday (Robots) which I have pretty much NOTHING planned and it's the weekend after this one! EEk! It's still hard to believe this month that my age range of kids will be 7-1... Mostly I can't believe I'll have a 7 year old... scary stuff!
Posted by JuLiE at 6:24 AM