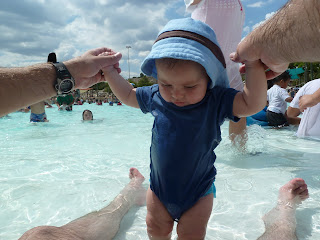 Saturday we took the boys and one of my husband's friends daughter to Six Flags for the day. We picked up some doughnuts to eat on the ride there, had a picnic lunch and went out to Olive Garden for dinner. We went on a few rides (hubby and I switched off watching the 2 little ones and whoever didn't want to or couldn't go on the ride) and we spent most of the day at the water park in the wave pool. 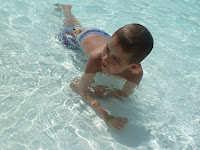 The wave pool gives mandatory 15 minute breaks so during the breaks we'd take Logan to go on a water slide. It was a lot of fun. Then while Logan and Kahleah were swimming around like little fish, CJ and Wyatt napped and Jameson and I played, nursed, and he took a nap too! 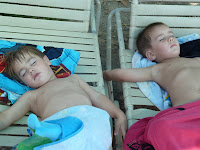 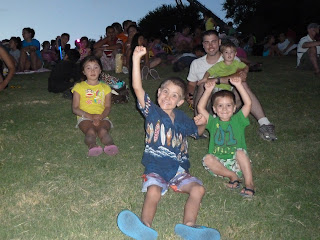 It was about 6pm when we headed out for dinner and I really wanted the kids to see the laser light show and the fireworks (Wyatt and Jameson have never seen fireworks so I thought it would be especially cool for them and I knew the bigger kids would enjoy it a lot too). While we were watching the show Logan laid down for literally like 2 seconds and was passed out! It took a little bit to wake him back up again! Of course it was after 9pm at that point and we left the house that morning around 9 am so it was a long, busy and super fun day! Since we hardly did any rides the boys have been BEGGING to go back again. Good thing we got passes this year so we can go often and just do a couple rides at a time so the passes are totally worth it. I can't wait until the boys are all old enough to go on all the rides so we can just run and hit a ton of rides each time we go. It can be pretty stressful right now since Jameson can't go on ANYTHING and there are only a few things CJ can go on and even less that Wyatt can go on. Logan, even though he's only six, is so tall he can go on almost everything except for some of the really big loopy roller coasters... he'll probably be tall enough by next summer at the rate he's growing though!
Posted by JuLiE at 6:18 PM