Yes, I have been slacking TERRIBLY... and not just on blogging but on everything. This pregnancy has been murder on my ligaments and my hips and I have just been in so much pain I can barely function. I'm so thankful my husband has been off work and can do more since his surgery because he has been an amazing help with the boys and making dinners. Knowing that the end of this pregnancy is probably 2 weeks or less away I have really been trying to get the house in order but since we just had Chanukkah and Christmas there is a lot to do still. I finally got most of the decorations down and put away (going to try to get the outside done tomorrow) and I've been keeping up pretty well with the laundry. Almost all of the new toys the boys got have been sorted and put away (we need to buy a few new boxes for things though) but once I get the decorations back in the attic the house should be pretty much in order again. HORRAY!!! 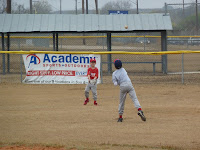 The baseball league that Logan plays teeball with had some serious vandalism this month (it really breaks my heart that people could do what they do) and the CPLL (Capitol Park Little League) is run soley on donations and volunteers so to help raise money they announced a Christmas Baseball Camp for $75 to go for 3 days. It said 13 and under but most of the boys were around 10-13, Logan (5, almost 6) was by far the youngest there. But he actually had a great time and the older boys were so fantastic with him! They all were supporting him and routing for him and they didn't even pick him last when they picked teams!!! (which, btw, made me tear up - stupid horomones! LoL). I think Logan really learned a lot and it was good for him to be around some older boys with positive attitudes. 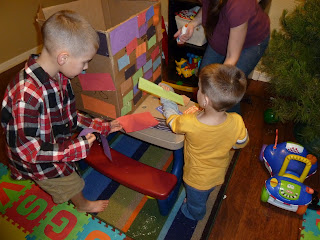 Today I decided, after baseball camp, a nap, and playing outside with the boys, that we would put "bricks" on a box to make a little house. It was a box from Christmas gifts that my husband had cut a piece out and it already looked sort of like a house and had sort of doors in the front  and the boys had been playing in it a lot. So, I figured we could  have fun doing an art project and make it LOOK like a house! The boys really had fun gluing the "bricks" (just colored construction paper I cut into rectangles) and then Logan wrote "Welcome" on the front flap that looked like a door mat. 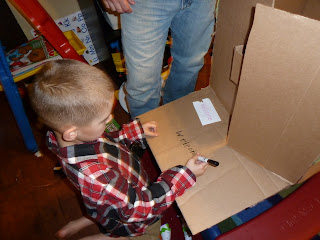 I really think it came out cute! And it will be totally dry for them to play in it come morning so I know they will be really excited when they get up and see it sitting in their toy room. I was thinking of putting a blanket or pillow or something else in there but maybe I'll wait and see what they decide to do with their imaginations first.
Posted by JuLiE at 7:11 PM No comments: 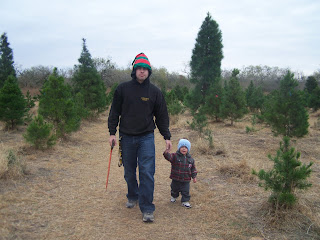 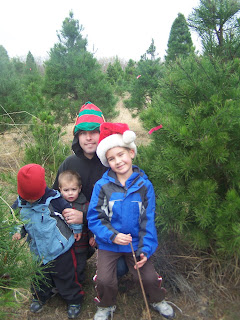 Today we went to pick out our Christmas tree. Well, that was after the boys played with and then figured out where to put all their new toys from Chanukah last night. It was a nice little drive to the same Christmas tree farm we went to last year, Seiler Farms and going earlier this year gave us more options on trees than last year. And of course the boys had fun running around looking at all the trees until we picked the perfect one. Although daddy and I had different ideas on which one was perfect. Of course, we ended up with mine and it looks beautiful! We always manage to pick a freezing day to pick out our tree, which in San Antonio, Texas, is a pretty difficult thing to do! Today definintely wasn't the coldest Christmas tree trip we've made but we all were bundled up nicely for the 58-62ish degree weather we were wondering around in. After we agreed on our perfect tree daddy got started sawing it down and then each of the 3 boys had a turn "sawing" too. Logan is probably tht only one that really did any actual sawing but CJ and little Wyatt got down and tried too.
Then it was time to get the tree loaded up and the boys ate the candy canes the lady that worked their gave to them while mommy and daddy got the tree ready to go. Wyatt needed another nap when we got home which worked out well so that Logan and CJ got to help me decorate the tree. Then I put all the presents out underneath... fingers are crossed all 3 boys will listen and none of the presents will get opened! Logan is under strict instructions that if he sees one of his brothers even touching the presents he is allowed to tattle and be BETTER come tell mommy or daddy. Luckily Logan is pretty much always the first to get up and doesn't take naps so he's the best to keep an eye on the tree HeHe :)﻿﻿
﻿﻿﻿﻿﻿﻿﻿﻿ ﻿﻿﻿
﻿﻿﻿ 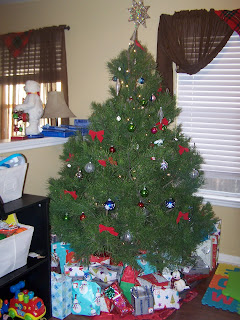 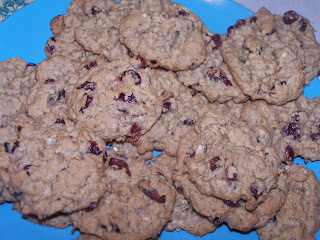 I've been on a baking frenzy lately and today I decided to try some Ranger Cookies. I'd never had them before but can't go wrong with oatmeal, cocounts and raisins (or craisins in the ones I did today). I can't stop eating them! I packed a bag of them so I won't eat those so I can take them over to Mimi's house for Chanukah on Saturday. They said they didn't need me to bring anything so I'll probably bake something else too and just bring a bunch of yummy homemade treats over! Who doesn't love sweets for the holidays? And speaking of holiday's and Chanukah... today was the 2nd night so it was CJ's night to light the candles (we start with the youngest and work our way up). Also when I was baking daddy was watching some Charlie Brown with the boys and paused it for them to come help me mix up some of the ingredients for the cookies. Then they finished the movie while I baked and waiting for the sun to set to light the menorah.Then the boys got to open a present and they had a blast riding on their "horsey's"
Posted by JuLiE at 6:08 PM No comments:

After doing the You've Been Booed for Halloween I wanted to do the You've Been Jingled for Christmas time. Since today was the first day of December and I had baked some cute little christmas tree cookies the other day I decided to go ahead and Jingle my 2 next door neighbors. Since I did homemade cookies and I didn't want them to get tossed out I tried to give a hint as to who they were from so they would feel confortable to eat them! So attached to the bag of cookies I stuck a little poem/note. 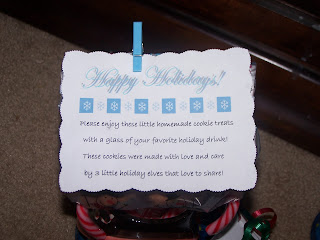 In case you can't read it it says:
Happy Holidays!
Please enjoy these little homemade cookie treats
with a glass of your favorite holiday drink!
These cookies were made with love and care
by 3 little holiday elves that love to share! 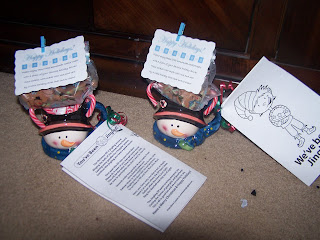 Then I also got a cute mug, some candy canes and a packet of hot cocoa so even if they don't eat the cookies they still get a little store bought treat to enjoy! Hopefully they'll pass it on and the whole neighborhood will start to JINGLE! I just LOVE LOVE LOVE the holidays! I can't believe it's already December. The year was dragging and dragging and then once it was October the time just started to fly by! All my gifts are wrapped for Chanukah and for Christmas and Chanukah started tonight. I'm waiting for my husband to get the lights up on the house (I already did the yard and decorated inside) and then hopefully this weekend we can go cut down our tree and get it up and decorated with plenty of time to enjoy it!
Posted by JuLiE at 7:02 PM 1 comment: