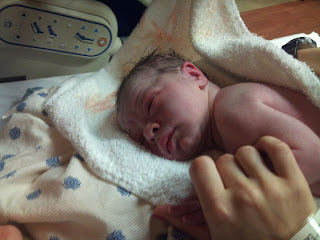 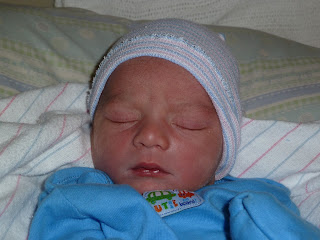 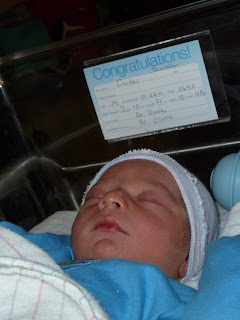 I started out today making yummy breakfast for the boys (eggs, sausage, and blueberry toast) and then the boys did their own thing while I went on a mission to clean. I got laundry washed, folded, and put away. The kitchen counters scrubbed, dishes put away and a load into be washed, oven cleaned, kitchen table cleaned off and then swept and mopped the floors. The boys watched shows and played and helped me clean, all while their daddy slept (until almost 2pm!). We had lunch and the boys went down for nap and I woke my husband up so I could run to the store and grab a few things (we were out of a ton of things but I can't do a full shopping trip myself these days). When I got back he had started dinner and the boys and I read and played around for a bit until it was time to eat and then after dinner was cleaned up and the boys put the clean dishes away we went into the living room, blasted some music, and had a dance party! It was a tad painful for me with my big belly but we had a blast! The boys were going crazy and giggling and playing around with eachother, it was so cute. After a while we were all worn out so the boys started to clean up then took a shower or bath and got ready for bed. We cuddled for a bit and called it a night. I've really missed playing around with the boys. It's been hard because I've been hurting so much but I love it and they love it so I know that I really need to make an effort to try harder to play with them more. Once the baby is here and we work out a good routine I think it will be easier to get things back to normal and spend lots of time with my sweet boys.
Posted by JuLiE at 9:29 PM No comments:

I'm finally catching up on this whole house cleaning thing! ALL the Christmas decorations are packed up (just waiting for my wonderful husband to take down the tree) and waiting for him to get all the boxes out of the hallway and put up into the attic. Once the tree is out of the toy room I can get all the pine needles swept up and put the baby jumperoo in there and have the boys keep up (like they have been) with keepting it cleaned up in there. I have a few dishes in the sink that need to be washed and a quick clean up in there and it will be good and then sweeping and cleaning the table (again) in the eating area --- it NEVER stays clean in there for more than a few minutes I SWEAR grrr! Time to clean the boys bathroom again and the boys have some toys to take care of in their room but other than that the only real mess is my bedroom (but what else is new?). For now my living room looks GREAT! 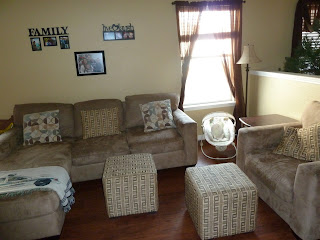 I'm so excited that it looks like a real room again and hopefully it will stay that way. I just need to get my wonderful husband to clean out his fireplace so that Wyatt will stop getting soot all over the place because, apparently, he thinks it's a fun toy. I am even caught up on laundry right now! Once the pain in my back subsides a little I'll get back up and try to get more done (hopefully before the boys wake up from nap). Now if Jameson would just decide to have his birthday I'd be super good to go! I'm ready to get into a routine and get used to doing things with a newborn in the house again. Hopefully I can KEEP up with everything now so that I won't have to play CATCH up anymore! I really can't stand my house being such a disaster area all the time!
*****************************************************************************

And I think I posted too early today because I got SO MUCH more done this afternoon! I haven't had this much energy and felt this good in a really long time. If it wasn't for a little soreness and my big old belly getting in the way of everything I might not even know I was still pregnant. I feel so much like my "normal" self today. I got dinner going early (my spagetti sauce tastes so much better when it simmers for several hours) and then my husband took down the Christmas tree AND cleaned out the fireplace! I was able to get the floors all swept and the jumperoo is now in the toy room. It looks so good in there now! Wahoo!!! 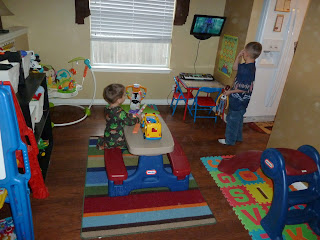 I also cleaned the boys bathroom, although I do need to scrub out the tub still. Dishwasher is ready to go and the kitchen is cleaned up. Just a few more things that need to get done but really not much left at all (other than keeping up with everything that I've been doing).  My house looks like a house again and I can't believe it! Time for Jameson to get here now so he can enjoy coming home to a clean house!
Posted by JuLiE at 10:49 AM No comments: