Experimenting on my kids O.o

Ok, that sounds worse than it is.

Really I just tried a new kind of smoothie/orange julius and made them drink it! They were less than thrilled by the "green stuff" I put in it but I thought it tasted really good and you couldn't even taste the "green stuff" (kale).

I had to use ice since I my bananas weren't frozen yet ( see my smoothie blog for more info on that here http://myquesttobeabettermommy.blogspot.com/2013/01/smoothies.html) and I think the ice took away some of sweetness of the juice and banana so I added a dash of Splenda that I don't normally add so I am posting the recipe as it should be if I was using a frozen banana and no ice :)

I also topped it with a maraschino cherry and a little of the syrup just because ;) 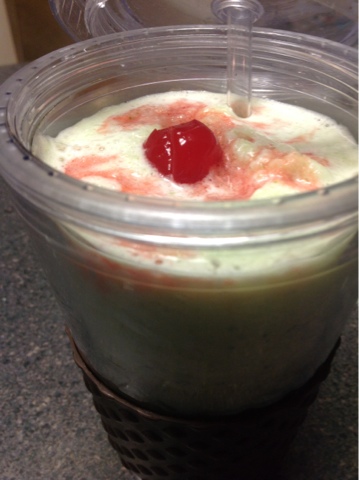