For Logan's birthday this year he got a cute little art thing to make cement stepping stones. We hadn't done them yet, there was 4 and I thought each of the boys could make one and I decided to try it today. It didn't go as well as I'd hoped :( The box only came with 1 mold to mix the cement stone in and so I had to improvisee so that CJ and Wyatt could do one too and figured I'll do Jameson's another time. Logan and CJ really had fun doing theirs... Wyatt didn't understand much but it was still cute. Probably sometime tomorrow we will paint them because it said to let them dry for a few hours. 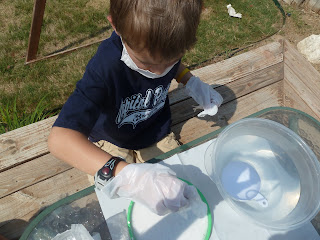 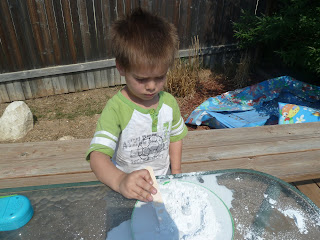 Then I was in the mood to bake after dinner and had gotten stuff to make a ganache and decided to try it out. I made the ganache (which I realized I had the wrong chocolate - unsweetened- so I had to work with it and it finally turned out pretty good) and then I topped some sugar cookies that I made from scratch. I had some extra ganache and tried to make some truffles but they didn't look so pretty and since the ganache wasn't as sweet as it probably should have been they didn't come out the way I'd wanted. But you live and you learn and next time my ganache will be PERFECT and I may do them on the cookies again because they came out super tastey! We dropped some off with the neighbors so I don't eat them all lol.

﻿ ﻿ The boys really love to play outside and they love playing with the sidewalk chalk a lot. The weather has been great for playing outside this past week or 2. It hasn't been cold but it hasn't been really hot and humid either. Yesterday the boys were out front playing with the chalk and Logan saw a box we had laying around and decided to make what he called "a puppet show". He ripped of some stuff on the open part to make it bigger and then decorated a scene inside with the chalk. Then he went and got some toys and some of his art from school to put inside the box to make his "puppet show". It was really cute and I love how creative he is! 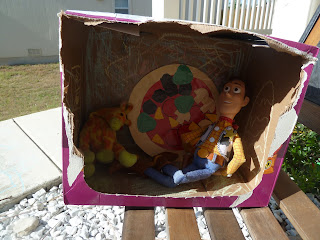 The day before yesterday was the Kindergarten Fiesta Parade at Logan's school. It was really fun to see all the different and creative floats! I couldn't help but wonder how many were done completely by the parents though. For Logan's I helped a lot, especially since I had to use hot glue to keep a lot of the stuff together, but it was all his ideas. I think his came out really cute! It's hard to see in the pictures but he made a Fiesta Train and he put in his little zebra named Rainbow and his Woody toy from Toy Story to ride along. 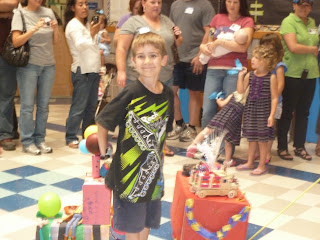