I do believe Hell froze over today... I got up and took Logan to school and when I got home and took the baby from my husband he got out of bed to go to the bathroom and had said he was going to set his alarm for 9 to do homework. I asked him about the lawn because he said he was going to fertalize the back and mow in the front today... So he got up and out and did the lawn before starting homework and has been up ALL day! Having him up was so nice and I was so productive because he was being productive! I've found that when he is sleeping all day then I get grumpy and don't want to do anything since he's not doing anything, but when he is up then I feel bad sitting and doing nothing so I get up and do things. I got a lot of laundry done, dishes done, kitchen cleaned, clothes put away, the boys rooms cleaned up, and started dinner all by 11am! It helped that Jameson was asleep pretty much that whole time too so I was able to do stuff.


After a productive morning I went to get Logan from school and after his homework was done we got started on his first ever big school project! All the kindergarteners have to make a float for FIESTA that they will pull in a parade at the school. Logan decided he wanted to make a train so ... we started on our
Fiesta San Antonio Train!
﻿ ﻿ 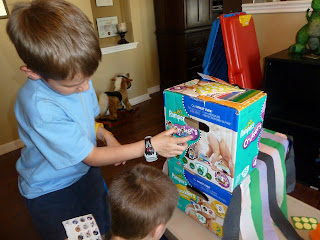 Then we had dinner and Logan had a baseball game. He did AWESOME! This is his 5th season of tball and for the first time ever he did a SLIDE into HOME! I was so excited I honestly almost cried! I think today was the first time I have watched him play baseball and he was really enjoying himself! Next season for Fall Ball he'll be doing coach pitch (if he sticks with baseball) and it should be a lot of fun watching him learn and play and see him actually have to try out for a team. The game today ran late so it was a rush to get home, shower, and into bed but who cares if you are going to sleep a little late when you've had such an awesome day?﻿
Posted by JuLiE at 8:36 PM