With Justin's shoulder broken and now after surgery we've been home A LOT. I now have 4 "kids" to tend to! Between tending to the 3 little ones and then having to help Justin out with everything the past few days I am running on empty. Thankfully he is starting to feel a little better and able to get up and move around a bit. The poor little boys have been dying to play with their daddy so they were psyched today when he was out of the bedroom for most of the day. We've spent a lot of time cuddled up on the bed in our room or on the couch watching movies or TV. Justin's dad was in town to help out the day of the surgery and for the past few days after. We took the boys for walks and to the park and swimming so they got to get out a little bit. Of course Logan and CJ now have took that week to get sick. Thankfully they both recovered quickly and feel great now. 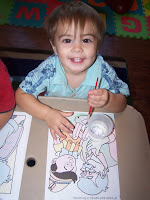 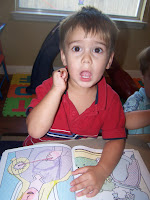 Now with my MIL visiting I have been able to do a little bit more with the boys and she is helping me to get all caught up on the house cleaning (she's so wonderful!). She brought some neat painting books where they just use water and put it on the paper and it brings the colors out. CJ and Wyatt had fun with those, even though it ended up with Wyatt's whole paper with water dumped on it! Then another day CJ saw the shaving cream in the art supplies cupboard so he and Logan decided that they wanted to play with that for a while. Wyatt tested it out a bit but wasn't really interested in it. CJ, on the other hand, ended up completely covered! Logan had a blast making all his shapes and letters, such a little smarty pants. They have also ﻿﻿﻿﻿ ﻿﻿﻿﻿﻿﻿﻿ ﻿been little lazy butts enjoying cuddling with Daddy on the bed and watching different TV shows and movies. It's the most time that they really get to spend with their daddy since he is in so much pain. If we have something we have to do he can be up and about for about 2 or 3 hours but even that really knocks a lot out of him. It's better for him not to rush it though and give his body all the time it needs to heal from the surgery so he can work to get back to where he needs to be. So for now he spends most of the days in bed watching shows and when the boys are in the mood to sit still and cuddle up with him they crawl into bed too.﻿﻿ 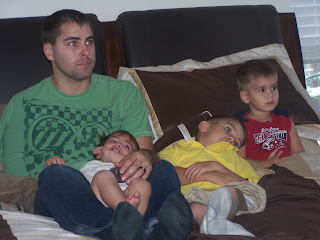