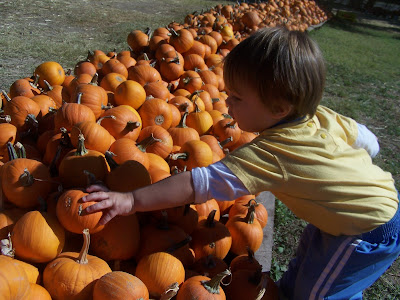 We finally made it to a pumpkin patch today! It was a little disappointing though because I had heard it was a really fun patch but when we got there no one was really there and there was nothing to do except pick out pumpkins and snap some pictures... so that's just what we did! CJ wasn't very happy about the pictures when we tried to get him to sit still with his brothers and then he decided he didn't want to get a pumpkin (that is until after we paid for Logan and Wyatt's and were getting ready to leave lol). In the end they all got their pumpkins and I got some really great pictures! So at least the trip wasn't a total waste and it was only about 15-20 minutes away. 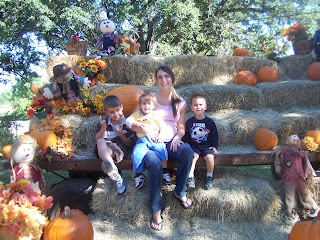 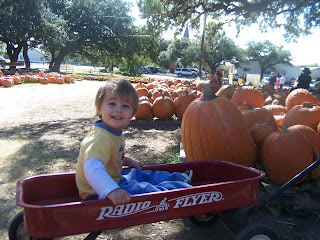 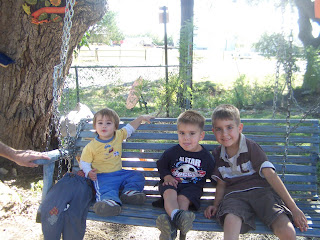 ﻿﻿﻿﻿﻿﻿
﻿ ﻿I could post 50 pictures but I'll stop with some of my favorites :) I love pumpkin patch pictures! I'm glad the boys enjoyed themselves even though there wasn't any real activities like we are used to. The other pumpkin patch we like is an hour away and you have to pay for admission and for a lot of things inside so this worked out to be fun and in expensive too! Then we went out to dinner as a reward for Logan having gotten 5 days of dry pull ups (he gets a sticker on a calendar whenever he has a dry pull up and when he gets 5 he gets a reward... it starts over every month and I think the most he's gotten ever in a month was 11 days). He also had 2 solid weeks of green happy faces at school so we were celebrating that as well. When we got home the boys played for a bit before reading a halloween book and going to sleep. They need lots of rest for tomorrow because Logan has a 9 am game and then when they get up from nap we are going to the Kooky Karnival at Logan's school! This is shaping up to be a really fun weekend starting with today :)﻿
Posted by JuLiE at 7:03 PM