So here we are on the Orange Rhino Day #3! I did it! I did it! Today was pretty easy since it was Friday and after school we go straight to the park and spend the majority of our day with friends and eating snacks.

Here I am again though, probably posting my win too early. All 4 boys are still awake so there is always a potential for yelling, but I think I can get through it since we took care of the monsters.

Ah, yes, the horrible monsters that plague Wyatt and have spread to torturing the other boys at bedtime as well. I promised Wyatt last night that I would get some monster spray to keep the monsters from coming out of his wall. I had seen (on SuperNanny) that if you put some water and some lavender oil in a spray bottle it was a great monster spray. Well, I don't have an lavender oil but I did have some lavender scented fabric softener so I put a tiny drop of that in with some water. After our story I tucked the boys and let them spray a few sprays around their bed while they said a little spell. They loved it. 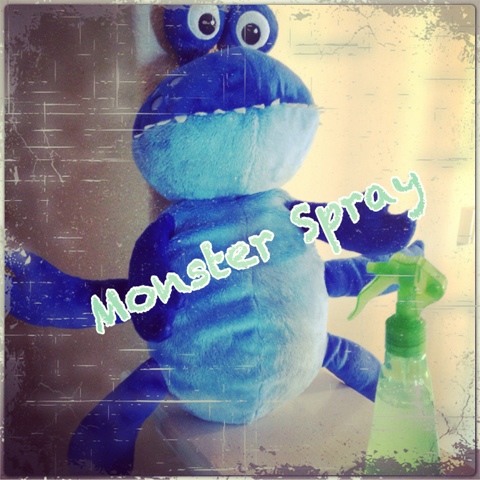 Monsters, Monsters, stay away!
I'm going to get you with my spray!

Yeah, kinda lame but it's what came to me lol

Hopefully the monster spray will keep those mean monsters at bay and work for a while.

Now if I could just get these boogers to SLEEP!